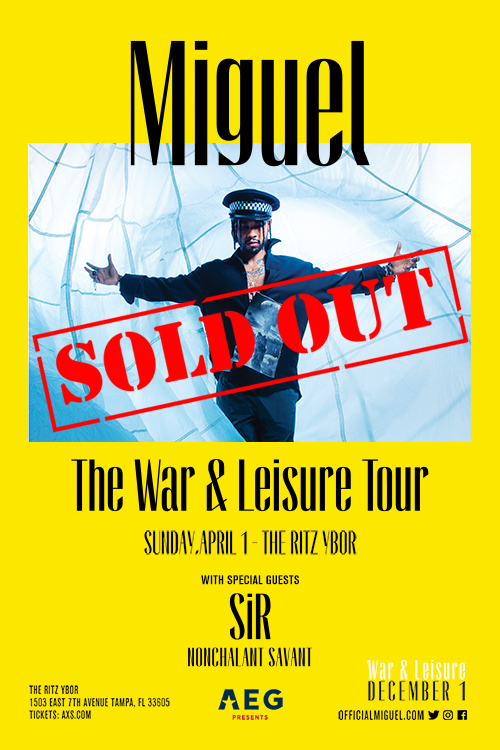 THIS SHOW IS SOLD OUT!

Over the last decade, Miguel’s established himself as one of R&B’s most sonic fabulists, a consummate artist unafraid to follow his impulses wherever they lead him. His fourth studio full-length, War & Leisure, is his most ambitious and stunning project yet, a perfect blend of forward-thinking production and melodic delights that more than embody the duality hinted at in the album’s title. This is Miguel fusing the two halves of his creative id—the restless experimentalist and the crowd-pleasing hit maker that millions of fans adore—to reach a new peak in artistic achievement.

Following the mind-blowing and thoroughly sensual Wildheart in 2015, Miguel conceived War & Leisure‘s twelve pop gems over the course of the last year and a half—a process that allowed him to find himself amidst the increasing chaos of the modern world. “It’s my best way of describing the now,” he explains when discussing the album’s yin-and-yang title, which reflects the music’s focus on the passion and pain of everyday life. “Anything that’s in my conscious world, and what’s feeding my subconscious—it’s all war and leisure.”

What resulted in these sessions is an album that finds Miguel perfectly blending the skyward pop of 2012’s Kaleidoscope Dream and the restless, moody vibes of Wildheart—reflecting the true Miguel experience for both listeners and the album’s creator. “On every project, I’m trying to paint a picture for my future self to go back, listen, and remember my experiences and how I was perceiving the world through music,” he states on the mercurial meeting point that War & Leisure reaches. “Kaleidoscope Dream and Wildheart are two sides of the same coin, and this is me taking those sounds and applying all the energy I’m feeling most from those two contrasts.”

And that energy is felt throughout War & Leisure, from the loose- limbed funk of “Pineapple Skies” and the atmospheric club vibes of

“Skywalker” to the body-moving “Caramelo Duro” and the contemplative ecstasy of “Now.” “I like challenging my fans by doing things they wouldn’t expect me to do—to show them a little more about myself,” Miguel states regarding the album’s intentions, and throughout War & Leisure he constantly pushes his music in new directions while delivering on the type of serene R&B that his audience has come to expect.

Joining him on this sonic journey is an array of collaborators: a wide array of producers ranging from Jeff Bhasker and Dave Sitek to Salaam Remi and Raphael Saadiq, and vocal contributions from today’s best and brightest—including Kali Uchis (“Caramelo Duro”), J. Cole (“Come Through and Chill”), Travi$ Scott (“Skywalker”), and Rick Ross (“Criminal”).

The latter’s contributions were especially felt on the smooth and dramatic album opener—a pairing that perfectly suits “Criminal”‘s playful pleas. “I’ve always been a fan of his ability to paint pictures,” Miguel enthuses about working with Ross for the first time, “and ‘Criminal’ is about painting the picture that I’m a little bit crazy, so I need someone who’s a little bit crazy just like me. We’re always searching out for people who can resonate with us on that level, and that helps bring out the best in us—to stay crazy, which is what we need.”

Elsewhere, the dark and guitar-flecked “City of Angels” finds Miguel straying from romantic concerns to focus on the anxiety and uncertainty many face in the world today—extending past politics and encompassing the threat of conflict. “It’s a big question mark, and one of my favorite songs because it deals with a very big and very possible hypothetical: What if we ended up in the middle of a war?,” he explains. “It’s a real possibility that we’re collectively choosing with how we treat the decisions that are put before us. It was a moment for me to be creative and explore my own imagination—taking the ‘What if?’ question and combining that with whatever emotions I was feeling while watching the world around me. It’s kind of fucked up, and it makes us feel as if we’re really 140 characters away from possible war.”

And exploring such darkness wouldn’t be possible without the balance of light struck on War & Leisure—a thorough exploration of self, which is exactly how Miguel wants it to be. “It’s about pushing forward and being who you are,” he meditates on the album’s true philosophical center. “The intention is to stay upbeat and positive in the face of everything. I’m standing in the middle, just like everyone else is, looking out—just wanting to maintain a positive outlook and continue with my way of life, all the while being mindful about what’s really happening.”

“The best thing we can do is continue fighting our own personal wars that we have to deal with every day,” he continues. “The more we do it, the more natural it becomes and the more likely we’re able to share that energy with each other.” And there’s no better soundtrack for the battles we fight every day—in hopes of bringing us closer together— than War & Leisure.