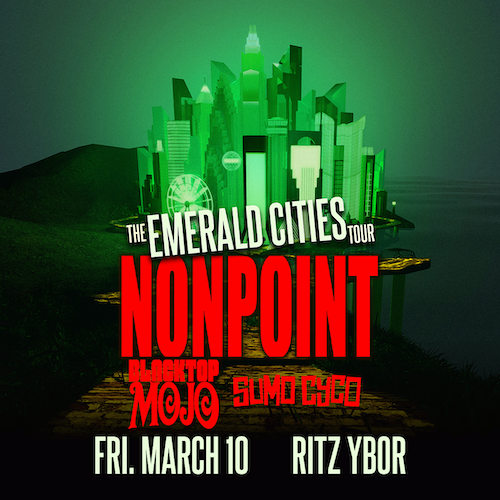 Tickets are available online at: bit.ly/nonpoint0310

** PLEASE NOTE that we cannot guarantee the authenticity or validity of tickets purchased from individual sellers on Facebook or Instagram.

StubHub, Seat Geek, Vivid Seats, Front Row Tickets, Tickets Center, and TicketsOnSale.com are also NOT official or authorized ticket sellers for our shows, and we cannot guarantee the authenticity or validity of tickets purchased from those sites.

For guaranteed valid tickets, please purchase only from ticket links via sunsettampa.com and theritzybor.com. We also strongly suggest purchasing tickets in advance to avoid a sellout.

For any questions, email us at events@theritzybor.com.

What is Nonpoint? Is it the legendary live show? The stories of the oceans of crowds they command? Is it record after record of endless anthems, infectious riffs and chest pounding rhythms? Is it the words that helped to save, transform and sometimes define the lives of some? Or is it the 5 men that meet their audience face to face, night after night, show after show, just so they can say thank you to the people that came to see them play?

Masters of, and pioneers in the nu-metal/rap-rock world, Nonpoint has quietly been the biggest and best kept secret of the rock/metal genre. Their songs and renowned performances have had music legends, from all corners of the genre and music industry, standing side stage to revel in the mayhem, to witness magic unfolding and audiences ignited. Hearing the chorus of the crowd as they recite the iconic melodies and lyrics of vocalist and frontman phenom, Elias Soriano. Watching him tentacle his iconic dreadlocks feet from the spinning and flying bodies in front of him and surrounding him onstage. Then with just a look, or wave of his hand, he makes a sea of people transform. Behind Elias, there’s rhythmic thunder created by co-founder and showman Robb Rivera as he flies through the air just before crashing down with unmatched force into their music. Rhythm guitarist, vocalist and visual performance master Rasheed Thomas alongside the high-flying powerhouse on bass Adam Woloszyn, both bring a force with medusa hair whips and flying guitars; they’ve re-defined the newest incarnation of Nonpoint. Now with the addition of Jason Zeilstra on lead guitar, whose chemistry with the rest of its members has begun to create a concoction that is poised to intoxicate audiences both old and new.

Now with the success of their new independent label, 361 Degrees Records, Nonpoint has transcended the underground and taken their rightful place in metal history. They continue to change the rules with their newest song “Back In The Game”, which keeps the Nonpoint tradition of inviting you in close, kicking you in the chest, then imprisoning an infectious lyric like, “Cause you’re looking at a one man death squad!” into your mind knowing it will never escape. This song and their Ruthless EP went live on December 27th, 2021. This follows their independent label plan of delivering music to their fans through more frequent releases and videos from the band.

In 2021, their song “Ruthless” reached #16 on Billboard’s Rock Chart, and were featured on the New Metal Tracks and Kickass Metal Playlist on Spotify with over 1.6 million combined subscribers, SiriusXM Octane’s Big Uns Countdown, LA Lloyd top 30, Loudwire Nights and “Ruthless” was the featured track for AEW’s nationally televised event BLOOD AND GUTS on TNT in May. “Ruthless” has reached over 3.5 million streams. Now their fan-voted cover of Prince’s “When Doves Cry”, at over 1 million streams, has quickly become a fan favorite, from the crowd applause at shows to their support and momentum online.

Today, Nonpoint continues to ignite streaming platforms, news feeds, social media platforms, and festival stages, and 2023 is shaping up to take them from rocks best kept secret to household name.