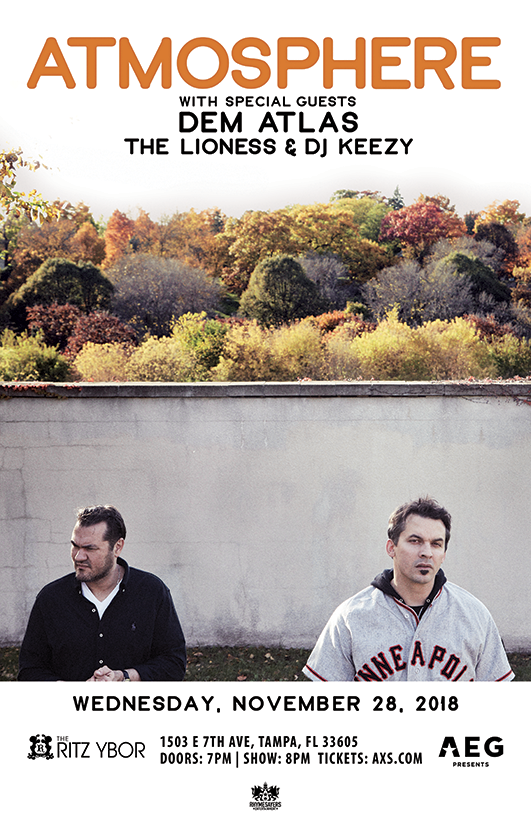 Tickets are available online at axs.com
VIP: vip@theritzybor.com (VIP is ages 21+ only)

The RITZ Ybor
1503 E 7th Ave – Tampa, FL 33605
www.theritzybor.com
——————–
Defining success is not an exact science by any means. In some ways, it’s especially difficult to quantify one’s success when they have a job that places them in the public eye, a position that is ripe for critique and high expectations. Perhaps those who best thrive in those scenarios are the ones who can navigate through all noise and continue to evolve and grow, both in their skill sets and as individuals.

In many ways, that is an integral part of the Atmosphere story. Over their twenty-year career they have managed to continually tweak and strive to perfect their formula, while neither straying too far off their path, nor resorting to playing it safe. Starting at 1997’s Overcast, the group’s first official album, and traveling through 18 years of new albums, side projects (e.g. the Sad Clown series and Felt), and various collaborations, all the way up until 2014’s Southsiders album, Atmosphere’s music has evolved in a way that differs from many of their peers and predecessors. A hard look at that evolution doesn’t reveal the commonalities of following trends or struggling to fit in, by either over-extending in an effort to stay cool to the younger generation, or succumbing to the pressure people tend to place on artists to maintain the same sound from album to album. Instead, the Atmosphere discography evolves in a natural way.

Musically, Ant has continued to define Atmosphere’s sound, ranging from a healthy mixture of upbeat and fun, to the oft more iconic, moody and personal. Through out the 1990s, Ant spent countless hours in his basement with a wealth of records, a keyboard sampler, a turntable and a 4-track, working with a who’s who of the Twin Cities’ Rap talent of that time. Those experiences tuned his ear, molded his work ethic, and shaped his vision. In turn, those lessons have continually become more prominent in the Atmosphere aesthetic, blending live musicians and sampled production with his keen sense of how to compose a well-arranged song.

As for the lyrics, Slug started his passion for rhyming with an obsessive-like penchant for the way words intersect, as well as how those words can be manipulated for unexpected and clever meanings. But, at the same time, early on Slug expressed an interest in doing more than simply proving he could be witty, but also writing about subjects that speak to people personally, as well as emotionally. These practices also naturally helped the Atmosphere fan base to expand beyond the usual independent Hip Hop audience, extending their reach to an alternative audience who also related to the personable appeal and emotional range of both Slug’s songwriting and Ant’s musical backdrops. Particularly, Slug has been consistently successful in leveraging his understanding for the power of words, recognizing that a song containing the right story or personal perspective can be extremely effective in capturing and holding the listener’s attention.

Undoubtedly, the impact of Atmosphere’s music has been the roots to their long-term success, but their continued rigorous touring and performance schedule has been the vessel for engraining these stories and the legacy of the music into their fan base. Early on in their careers, Atmosphere stepped beyond the genre lines and performed shows through out the Twin Cities with Rock bands, Punk Rock bands, and Jazz Ensembles. This was directly influenced by the fact that both of them were already fans of a wide range of music. Although this was a natural reaction to being a fan of the music, that experience also afforded Atmosphere, and their Rhymesayers peers, the opportunity to witness first-hand the D.I.Y ethos shared by some of these other musical movements. Atmosphere began to apply many of these tactics and work ethics to their growth, which was specifically influential in the development of Atmosphere’s approach to touring. These strategies found Atmosphere expanding their tours into cities that few, if any, Rap artists were including in their routing. The result is a storied connection between the artists and the listeners, which has grown into long-term Atmosphere fans passing down that experience to their children and so on, and thus continually ushering in a new generation of Atmosphere fans. Early on in their touring excursions, Atmosphere shows were noted in history for challenging the idea that Hip Hop audiences had to be filled exclusively with scowl-faced males fueled by ego and testosterone. Instead they created an environment that invited women to join in on the party. All of these factors have led to a fan base that ranges from ages 14-54 and beyond, and one that remains solid, as well as ever evolving.

As Atmosphere steps into their 21st year of making music, Slug & Ant show no signs of slowing, compromising or losing sight of their vision. Nor has time revealed any diminishing of those qualities that have brought them this far. As 2016 swung into gear, Atmosphere had already ended the previous year and led into another with a string of singles, and still have an abundance of music on the way, including their latest album, “Fishing Blues”. The title of the new album speaks directly to the sentiments that opened this bio; Is this the point in the career where Atmosphere chooses to step back, put up the Gone Fishin’ sign and reminisce about their successes? The answer, a resounding no, is found in the music, a collection of songs that both define and redefine the Atmosphere sound. Their passion and creative spark are as illuminate as ever. Slug and Ant still have plenty of stories to tell…

HDYNATION! ⚠ @flosstradamus makes his return on

DON'T YOU WANT... @cedricgervais tickets to his sh

#Gasparilla Knight Parade is this weekend along wi

HOT TICKET! 💥 @acraze will bounce back into tow

@theblackdahliamurder_official will bring their st